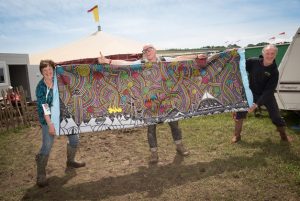 Stanley Donwood is well known as the artist responsible for every Radiohead album since 1995 and has created artwork for Glastonbury Festival since 2002. Also known as the “giant wristband”, this tapestry was one of only two created using the same needle printer as the coveted festival wristbands. Signed by Stanley and Michael Eavis.